The auction is the longest running fund raising event for the Foundation and its success each year is made possible by the hard work of volunteers. Volunteers from the community, in partnership with the foundation board of directors, call on area businesses, organizations, and individuals to secure items for the live and silent auction.

Each year the auction averages 150 silent auction items and 40 live auction items - the items range from merchandise, to gift certificates, services, hand-made items and special events such as dinners, hunting parties, trips etc.  All attendees enjoy dinner and a social hour before the live auction.

On Saturday, August 24, the Barton Community College Foundation sponsored its 41st Annual Big Benefit Auction “Reflections – Through the Years” at the Columbus Club in Great Bend.  Almost 30 volunteers donated their time to solicit and collect auction items, which resulted in over 160 businesses and individuals donating merchandise, cash, or items to make this year’s event a huge success – once again, we reached our goal of $40,000.

Kevin & Nancy Sundahl were recognized for their years of support to both the college and foundation by being named as recipients of the Old Bill Honorarium.  This year Old Bill raised $12,000 to fund academic scholarships for the 2020-21 year in honor of Kevin and Nancy.

The Big Benefit Auction is the most successful and longest-running fundraiser for the Barton Foundation. The money raised supports academic scholarships and enhancements to programs and facilities that directly impact the learning experience of Barton students.  Next year’s auction will be August 22, 2020.

Check out pictures from the 2019 Big Benefit Auction!

Each year the Foundation Board of Directors selects and recognizes loyal and generous donor(s) with the Old Bill Honorarium – this year they chose to honor Kevin and Nancy Sundahl.  The funds raised from the auctioning of Old Bill will go toward scholarships for the 2020-21 academic year. 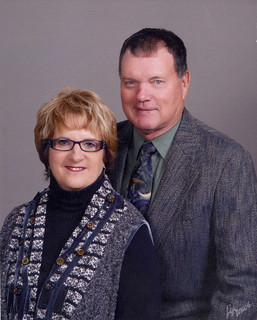 The Sundahls have also recently established an endowed scholarship, which is something Nancy said had been in discussion for quite awhile.

“Our family has strong ties to Barton Community College,” she said. “It has played a huge role in our lives and in the life of our community. We decided to establish this endowment as our way to ‘pay back’ the college for that role and at the same time to assist the college in continuing its mission of touching the lives of others by helping them to receive an excellent education.”

The couple were among the students in the very first class to embark on their college career at Barton Community College in the fall of 1969 when the college opened.

Kevin, who was the first athlete to be recruited to play basketball and run track at Barton, came from McPherson and Nancy was from Great Bend. They met in Biology class.

It was an exciting time for the two students at the newly established community college; Kevin leading on the basketball court and Nancy as a cheerleader for the Cougars. With their membership in this inaugural class, they were instrumental in the college’s history – involved in the selection of school colors and mascot, as well as naming the newspaper and yearbook.

After receiving their diplomas as members of Barton Community College’s first graduating class, Kevin went on to Sacred Heart in Wichita and Nancy went to K-State. The basketball star and cheerleader were married in 1973 and returned to Great Bend. They immediately continued their involvement with Barton and Kevin served as assistant men’s basketball coach. Neither Kevin or Nancy have ever faltered in their support of Barton Community College; both continue to be actively involved to this day with the Booster Club (Kevin is a Hall of Fame member) and with the Foundation Board of Directors (Nancy has served two terms).

All three of their sons, Shane, Kris and Lukas, attended Barton and followed in their dad’s footsteps on the basketball court.

“The boys received a great foundation here at Barton and it served them well when they transferred to K-State,” Nancy said.

As the Foundation celebrated its 50th anniversary in 2017 and the college enters its 50th year of service in the fall, Nancy said it seemed like the time was right for them to move ahead with their goal of establishing an endowment for scholarships to Barton Community College.

About the Old Bill Honorarium

In 1981, the Claflin Fire Department donated a stuffed buffalo head to the foundation auction. This unique item was christened as “Old Bill” and quickly became a mainstay of this annual event being auctioned off each year since. To date, Old Bill has netted about $230,000 in support of academic scholarships and program enhancements. Since 2002, the money generated from the sale of Old Bill has taken on an additional purpose – to honor loyal supporters and donors to Barton Community College.